I expected the show to be a fun show with Wubbzy and his friends (Walden, Widget and later Daizy) doing fun stuff. However, what i found out, it was just a loud mess.

Alright so, I tried to watch the show, as i have 10 GB worth of the show in a old computer, however, it's season 1 (not all of 'em as far as i remember) + Wubbzy's Big Movie.

So i decide to try to watch Muddle Puddle but i had a hard time, VLC was on a low resolution and my volume was low, apparantly the "background music" is a bit too, "high pitched" and "childish", i was suprised, even though this is a pre-school show that aired on Nick Jr, i mean, that's before their downward sprial toward canadian dogs and british pigs.

This makes me worried about the future of my future planned series "Chazzy, Rocket and RM06", as it was going to be a mix of W!W!W! and a old series of my from early-2018. Now that i think about it, Is it going to be a mix of a loud pre-school show and something mediocre to produce something half-edgy? Who cares, i'm still going to make the series into a reality, but it ain't a wubbzy revival, no no no. Anyways, back in the main topic.

I had big hopes on this being a fun show i can watch during the weekends when i'm bored, nope, guess i'll be stuck with those Reddit videos (with adblock :P).

Also, i planned to get a Wubbzy plushie in Easter 2020, i'm not cancelling that, even though the show may be meh, He's huggable.

Here it is, still incomplete, but i just gave up and i'm too lazy to convert the PNG to PDN.

That's one of the big issues on working on Chazzy, it's a lack of ideas, and lack of creativity.

Rocky's going to be "Rocket", i guess... However, i don't know how can i make a "planned villian character" be merged with a "somewhat girly machine making character".

Anyways, "Chazzy's Adventure" isn't a good name. I'm probably just going to go with "Chazzy, Rocket and RM06"* or something like that.

Email ThisBlogThis!Share to TwitterShare to FacebookShare to Pinterest
Labels: Chazzy

I played around with paint.net in a sunday evening for a while and made this. 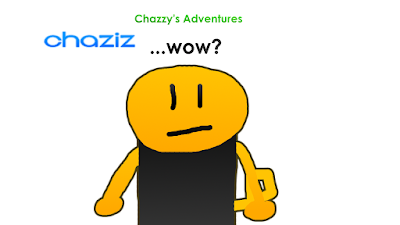 It's somewhat simillar to the title cards in W!W!W!, basic gradients and a lack of detail and what not. "Chazzy's Adventures" is a placeholder title as i don't have any ideas other than "Wow! Wow! Chazzy!", which isn't creative.

No, this is not a Wubbzy ripoff. Check the previous blog post for more detail.

Also, my digital art-style isn't that good, not as in Sonichu-levels, but, it's more in the levels of a 8 year old child finally learning paint.net and their former MS-paint circle tool art-style. I can draw Chazgame2 (thus Chazzy) and Wubbzy, if you exclude stick figures.
Posted by chaztheblogger at 15:59 No comments:

The future of "The Adventures of Several Robloxians" 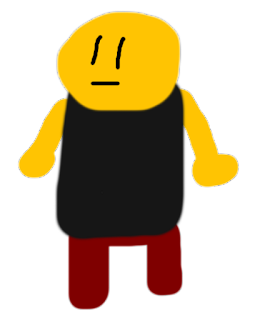 This is "Chazgame2", a character that i originally created as "Blox" back in October/November 2017. He's, more of less the mascot of Chaziz, however, before that, he was the main character along with Roblox Master 2006 (aka RM06) of a series about the evolution of Roblox (until it was then changed into a adventure), which only had 1 episode, and had two drafts of the 2nd episode before i sliently cancelled the series due to a lack of time and not having much knowledge to animate on Roblox. There was a villian called "Rocky", which was just the 2016 mascot of Chaziz (back when it was called Chazpelo)

So, most of the plans to revive the series were all in 2D.

Late-2019 Plan: Make it simillar to the original plan, move him to a town that was simillar to a Town Freebuild Server from Blockland, but make Rocky put in a machine that was more or less like GlaDOS (aka RockyOS)

The "Vlare" Plan: Revive the Mid-2018 idea, but move it in a different universe where Chazgame2 was more stupid and worshipped Wubbzy (does anyone remember him along with Waldo, Widget and Daizy?) and Roblox Master 2006 was more frustrated. and Rocky (still RockyOS) moved to that universe for "lulz". However, this idea was targetted to Vlare, however, I've left Vlare as no one migrated and no one cared about my Vlare Channel.

I've been brainstorming, and i scrapped the Vlare plan as it was too edgy and it was pretty much just a parodyof the Mid-2018 plan. I only have one more idea...

Chazzy is a hybrid of Chazgame2 and surprise surprise, Wubbzy. I don't have any other ideas than Chazzy. also, Post-Merge RM06's going to be a hybrid of RM06 and Walden, and i don't have a name for him yet, which is why he's still called "Post-Merge RM06". Also, i don't know who will get the Widget treatment, maybe RockyOS?

This takes place at a different multi-verse, where everything is the exact same as the late-2019 plan multi-verse but RockyOS does a universe merge (got that idea from a chrischan saga) from the Wubbzy universe to the main universe, and some explosion happens and "universal" lag (no, no one will be kicked for "time out") happens while CG2 and RM06 are sleeping. Then it goes something like this.

*newly appeared alarm clock rings*
Chazzy: When did i had a alarm cl- Wait, what just happened?

CHAZZY WALKS DOWN STAIRS AND FALLS DUE TO TAIL

Chazzy: This universe corrupted itself, incredible, Now i can't walk down stairs due to- a tail? Seriously?

Chazzy: Guess i'm part of a children's cartoon then...


That's all i have for now.
Posted by chaztheblogger at 14:22 No comments: